Year of the Eucharist

The article below announces the Year of the Eucharist for the Archdiocese of Baltimore.

The Archdiocese of Baltimore is launching a year – from the feast of Corpus Christi, June 6 this year, to the same feast in 2022 – to help Catholics focus on the real presence of Christ in the Eucharist.

The Year of the Eucharist, themed “Encounter Christ’s Presence,” will emphasize the four ways in which Jesus is present: “In the Word that is proclaimed (Scripture); in the minister who celebrates, who represents Christ; in the assembly, for where two or three are gathered in the name of the Lord, there is he in their midst; and above all in the eucharistic species, the bread and wine that become the body, blood, soul, divinity of Jesus Christ, crucified and risen,” Archbishop William E. Lori said.

The logo for the year features all four elements – Eucharist, Congregation, Word and Celebrant – separated by the arms of a cross within a circle representing the eucharistic host. A task force that includes archdiocesan staff members from evangelization, Catholic schools, Hispanic ministry, Black Catholic ministry and communications has been developing resource materials for parishes and schools in English and Spanish. The team has also received feedback from parish and school leaders.

Deacon Christopher Yeung, who coordinates the task force, said the intention is not to create a program that parishes must follow.  “Parishes are certainly free to implement the Year of the Eucharist all throughout the year,” he said. “But the archdiocese is asking everyone on four specific days to focus their attention on the presence of Christ in the eucharistic liturgy.”

Those four “days of encounter,” all Sundays, are:
The feast of Corpus Christi, June 6, on the real presence of Christ in the appearance of bread and wine;
The eve of All Saints Day, Oct. 31, focusing on Christ present in the congregation;
Sunday of the Word of God, Jan. 23, 2022, will reflect on the presence of Christ in Scripture on the annual celebration instituted in 2020 by Pope Francis; and
Feast of the Good Shepherd, May 8, 2022, to focus on Christ in the priest/celebrant who by the working of the Holy Spirit transforms bread and wine into the true body and blood of Jesus.

No large archdiocesan celebrations are planned at this time, due to the uncertainty of pandemic restrictions, but parishes are encouraged to hold local eucharistic processions and other events that promote the theme, including regional and virtual options. The archbishop hopes that at some point perhaps a large archdiocesan gathering “where we really celebrate our eucharistic faith and maybe at that point can do that ‘homecoming’ we’ve all been longing to do,” can be held if it’s possible to do so safely and responsibly. 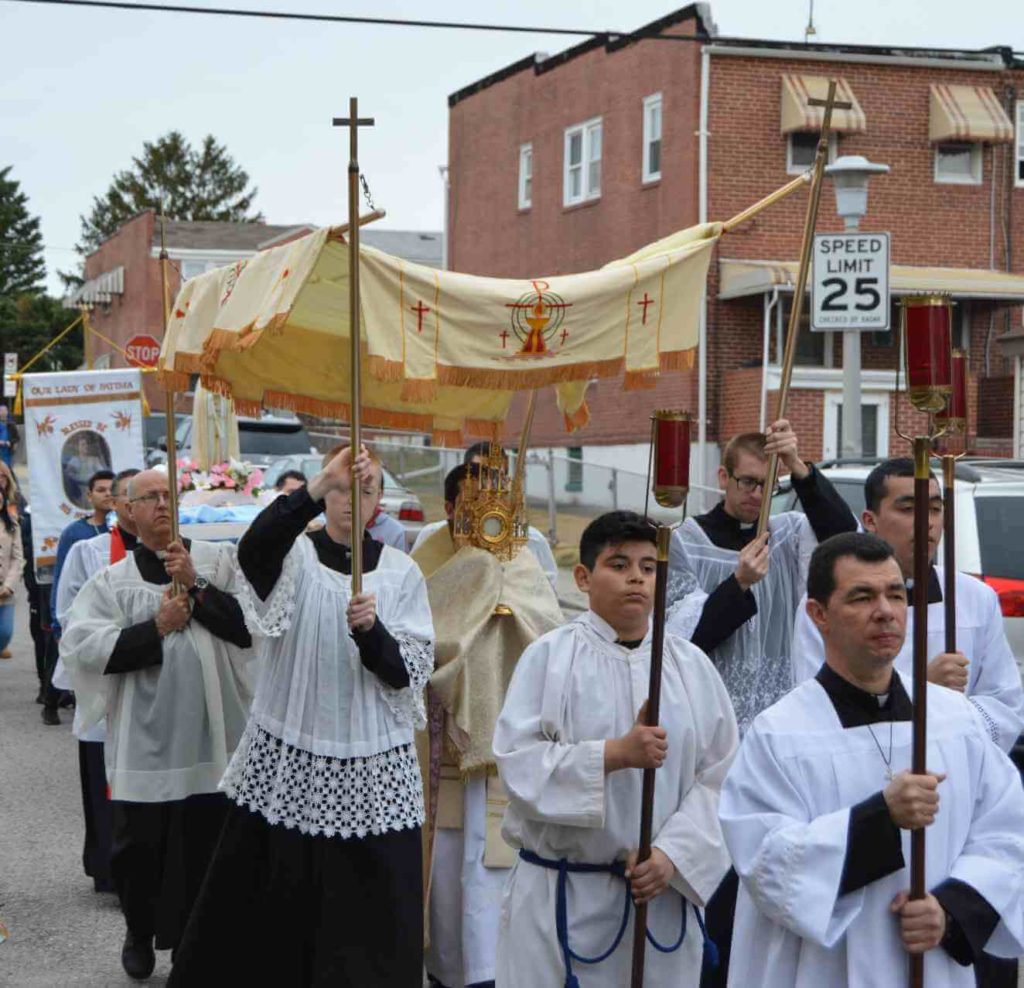 Missioners lead a mid-March 2020 eucharistic procession through the streets of East Baltimore. (Courtesy Servants of the Lord and the Virgin of Matara)

The Archbishop said that in videoconference meetings with priests to discuss how the church will respond when the pandemic is over, they noted that eucharistic faith among Catholics has been diminishing since before the global crisis.
“Study after study documents the sad reality,” Archbishop Lori said, referring to data that show that fewer than a third of Catholics actually believe that the Eucharist is the actual body and blood of Jesus. He “happily said yes” to the priests’ suggestion for a time focusing on the Eucharist, including evangelization and catechesis. He said the archdiocese is not alone in this, as other dioceses are considering similar efforts and the U.S. Conference of Catholic Bishops will soon launch a multiyear Eucharistic Revival Project.

“The Second Vatican Council in several places calls the Eucharist the source and summit of the church’s life,” Archbishop Lori said. “It’s where our faith is constantly reborn and nourished, and it is where we bring our lives. It’s the summit to which we bring all that we have and all that we are. 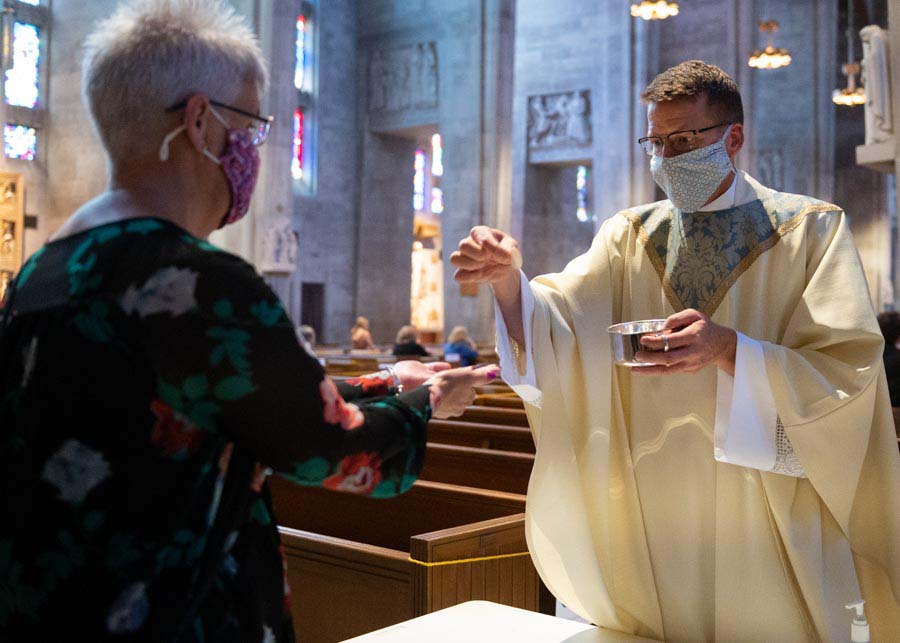 Father Jeremy Smith distributes Communion during Mass following his ordination to the priesthood Aug. 22, 2020 at the Cathedral of Mary Our Queen in Homeland. (Kevin J. Parks/CR Staff) “Particularly in a time of pandemic, when lives are being turned upside down and we’re reevaluating everything,” he said. “In the midst of all this change, to just recognize that encountering Christ in the Eucharist is fundamental to the Christian life. We can’t live without it, and it is both a reason for being and that which strengthens us to continue to be in mission.”

Parishes that focus on missionary discipleship are already inviting people into relationship with the Lord. What makes this year unique, he said, is that the archdiocese and its parishes are being especially intentional about inviting back to a deeper relationship with the church those who have fallen away from the practice of the faith or who have been marginally involved – either before or during the pandemic.

“I think the best way we do that is not first by teaching about the Eucharist in an academic way, but first by sharing our lived experience of the Eucharist,” Deacon Yeung said. To accomplish that, a web page at archbalt.org/year-of-the-eucharist will include a portal for people to share stories of how the Eucharist has had an impact on their lives.
“I think those will be the most powerful way to draw others who will want to share that same joyful experience,” he said.
“To attract, to inspire with just that basic Gospel message of encountering Christ in the greatest gifts that he’s given us – I hope that that will transform not only the people who will come back to church, but it will transform the way that the regular Massgoers think of themselves and their role within the body of Christ and becoming more intentional missionary disciples.” 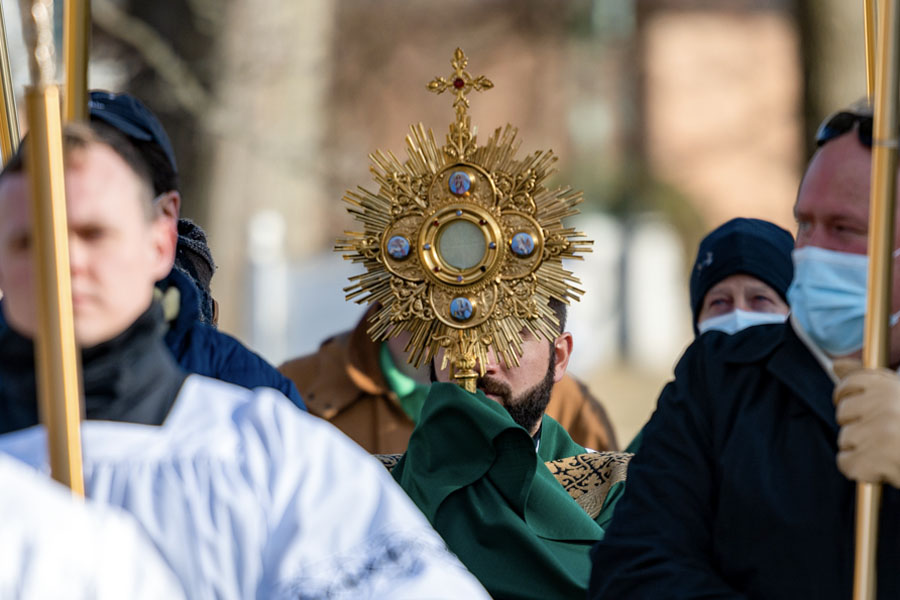 The Blessed Sacrament is carried in a January 2021 procession from St. Margaret in Bel Air. (Kevin J. Parks/CR Staff)
Amy Rohan, director of faith formation for St. Ann Parish, Hagerstown, is looking forward to the year, noting that “it’s beautiful to actively participate in the Mass.”  She added, “Encounter to me is an action word, and I feel like this theme is a call to action for us in this world. We look around and we see some darkness, we see some trouble. But as Catholics, we are called to action. We are called to not be passive.”

Deacon Yeung agreed. “The Eucharist is maybe the best-kept open secret that the church has. In a time when people are searching for meaning, connection and fulfillment – perhaps more than ever before – we hold a treasure, and I would dare say, the treasure, that can answer the deepest longings of the human heart – and that is Jesus Christ in the Eucharist. “For those in the know, clinging to Christ in the Eucharist has been a bulwark against the storms of confusion, anxiety, chaos and despair. It behooves us as the Church to share this treasure with as many as will receive this good news,” he said.

In September, we will be presenting "Presence:   The Mystery of the Eucharist.  To view the trailer for this program click below... 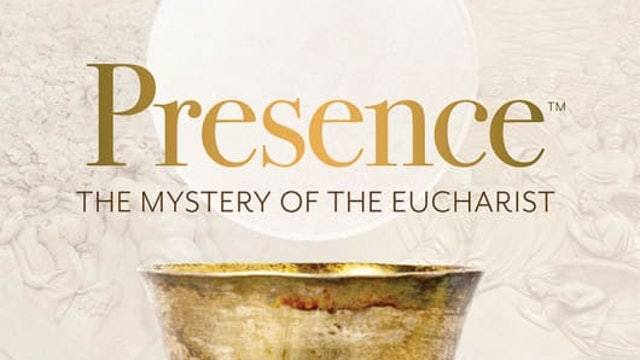